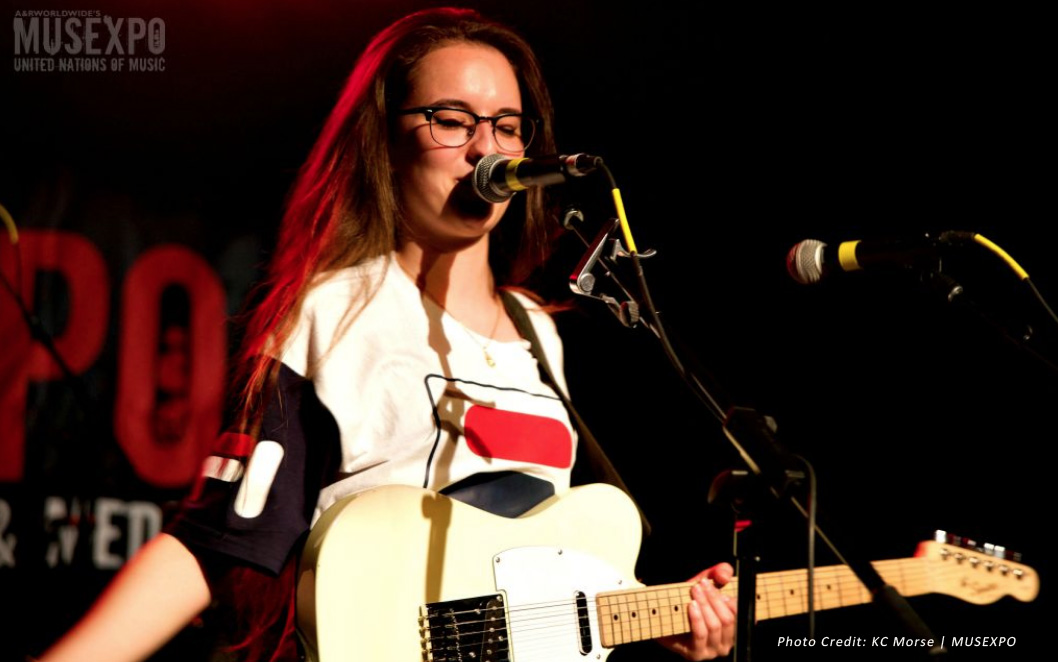 Influenced by the likes of Dusty Springfield, Amy Winehouse and Lana Del Rey, Veronica Fusaro first stepped into the spotlight in 2016 with her self-produced EP ‘Lost In Thought’ and surprised the Swiss music industry by winning the ‘Demo of the Year’ at the prominent national M4Music Festival.

Veronica’s young career already has many highlights. She’s been the support act for Mark Knopfler at the amphitheater in Nîmes, for Eagle-Eye Cherry in France, and then Ibeyi in London. On the festival circuit, she played Glastonbury 2019 and the Eurosonic Festival in 2020. A soul-pop album is now on its way, full of organic and raw sounds, honest lyrics and vocals that skillfully balance between the depth and playfulness of Veronica Fusaro’s music: pure, powerful and intimate.

As Veronica says, “I like to wrap sad emotions in colorful paper.”

Hamish Anderson was named one of Total Guitar’s Top 10 Best New Guitarists in 2018, two years after being named one of Yahoo! Music’s “Top Ten Best New Artists.” In 2019, the Australian roots-rock artist released his Independent Music Award-Winning “Best Blues Album” Out of My Head.

Hamish said this about Out of My Head, “I really wanted to take my time and write as many songs as I could for this album. I wasn’t writing to a specific genre or sound; rather, I let the songs reveal what they wanted to be….”

In April 2019, Hamish opened for Gary Clark Jr. in his home country of Australia. In early 2020, he opened for George Thorogood & The Destroyers on the sold-out tour. He and his album were featured in Guitar Player Magazine in the August 2020 Issue, which resulted in Hamish’s cover mention. Be sure to follow him to hear about what comes next for Hamish!

Gina Brooklyn is a unique singer-songwriter whose style combines a multitude of influences that transcend genres. By creating a captivating ambiance for her distinctive vocals, soul-gripping melodies, and engaging lyrics, she lures even the most demanding listeners into her world. The Ohio-born singer started her music career at the tender age of 15 when she co-wrote and recorded a song that led her to become a finalist in the John Lennon Songwriting Contest (2017). A year after, she was nominated for “Best Pop Song” in the Roundglass Music Awards.

Brooklyn’s single Butterfly was released in 2019 and attracted an overwhelming response from the music press and online sites. Throughout her career, Gina has performed at multiple prominent venues across the U.S., from The Rockwood Music Hall in NYC, The Hotel Café in LA, and The Rock & Roll Hall of Fame in Cleveland, Ohio. She’s also played the world’s largest music festival, Summerfest, in Milwaukee, Wisconsin, where she won the prestigious Best Emerging Artist Award. She was named the winner of the 2020 Global Djooky competition, where she will record at the iconic Capitol Studios in LA with legendary producer Brian Malouf.

Gina’s single No More Hiding was the follow-up to Who Are You Fighting For?, which was also co-written and recorded with Dan Epand (formerly of Nico Vega) and mixed by Mark Needham (Imagine Dragons, The Killers). The track landed Gina’s first sync in an online commercial for Spirit Wrist, an independent jewelry company. It tallied international airplay in the U.S., UK, Australia, Germany, South Africa, South America, India, and more.

To get the latest news on Prescription Vineyards’ artist relations and special events, we invite you to sign up for our ‘Take Two’ Newsletter. If you sign up, we’ll share a private link for 20% off All-Access or VIP All-Access tickets to the 2020 film fest!